The Instances section provides the ability to capture specific instances of models to be replaced, and/or have their configurations and suppression states changed. 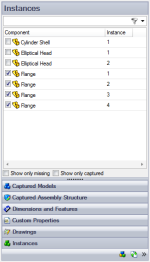 If you have a large assembly structure, you can use the search box to filter the list of instances.
The instance numbers shown in DriveWorks are not the same as in SOLIDWORKS. DriveWorks numbers instances in the order that they are in SOLIDWORKS' feature tree to make it easier to understand the effect of working with instances in generated models.

This option will display the captured parameters that are missing.

A missing parameter is one that is captured but has since been removed or renamed in SOLIDWORKS.

When any captured parameter is selected from the capture assistant, the parameter will be highlighted on the model and/or in the SOLIDWORKS feature manager.

Selecting any captured parameter on the model or SOLIDWORKS feature manager will highlight the reference in the DriveWorks capture assistant.

This feature is supported for the following parameter types:

This feature is particularly useful when controlling Instances.

The instance order in the SOLIDWORKS feature manager does not necessarily follow the order DriveWorks recognizes.

In the image below Flange <5> in the SOLIDWORKS feature manager is Instance 1 to DriveWorks.

Captured Parameter Highlighting indicates the instance parameter in the DriveWorks capture assistant, on the model AND in the SOLIDWORKS feature manager.

To capture an instance, simply check the box next to it in the instance list.

To uncapture an instance, uncheck the box next to it in the instance list.

Rules applied to instances that are uncaptured will be permanently deleted. This action cannot be undone.

DriveWorks will display the message below each time an instance is uncaptured.

Before uncapturing an instance, you may wish to make a copy of your group and projects.

For information on the rules that can be applied to captured Instances please see the section Instance Rule in the topic Model Rules.

Two or more identical occurrences of the same component within an assembly.