How To: Locate And Export DriveWorks Reports

DriveWorks produces reports at various stages during the Specification Process.

There are two areas where a report can be generated from:

In this case the report will be listed as Copying Specification <SpecificationName> based on Project <ProjectName>.

Subsequent reports are created for any operation performed on a Specification. If the Default Specification Flow is in use these could be:

Any number of these reports can exist depending on how many times a Specification had been edited or released. All reports are listed in the order they were created. 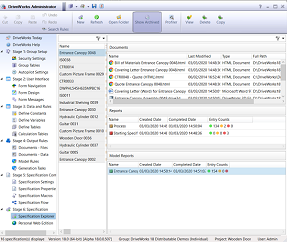 Depending on what was set to be processed during the Transition this is classed as the following:

A Specification Report can be exported so it can be viewed by anyone that has the DriveWorks Report Viewer installed (installs automatically with any DriveWorks Pro module listed above), without needing to send a complete data set.

The Specification is exported as a .drivereport file.

A Model Report is a report that is created when generating Parts and Assemblies.

This is useful when troubleshooting a project as the report will detail specific information on each models generation.

A Model Report is found in the Specification Explorer within Test mode in DriveWorks Administrator when running a Specification. To access this:

A Model Report can be exported as a .drivemir file so it can be viewed by anyone that has DriveWorks Administrator installed (the reader is automatically installed with DriveWorks Pro). This is useful because it allows you to send an individual Model Report instead of your whole project.

To export the Model Report: