The Animate Translation entity is great for animating models in a scene. It can be used to make your models more interactive and realistic. It can also perform demonstrative animations such as: drawers opening on a cupboard, opening a sliding door or showing an exploded view of a model.

The example above uses Animate Translation with an Ease Type called "Out" and an Ease Curve called "Bounce". The target position is then alternated every time the Node reaches the target position. This causes it to bounce back to its initial starting position.

The animate entities use Easing Curves to perform these animations. Commonplace on the web and in 3D, they are basic forms of animation that add further realism to a model or scene.

With the model Node selected and the Animate Translation entity added to the Node, the following will be displayed in the Information Panel: 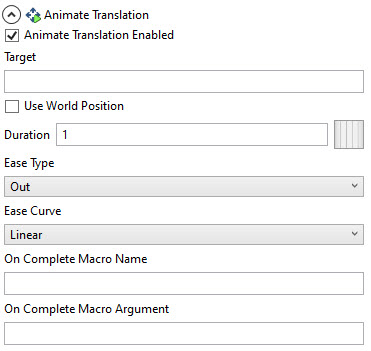 Enable and disable the Animate Translation entity. Disabling the entity will stop any animation from running and the Node will stay in its current position.

Target is the new position or target for the Node to animate towards. Target can be specified in two ways. You can target another Node in a DriveWorks 3D Document or you can enter the position as a pipe delimited list (X|Y|Z).

This property lets you set the position of a Node relative to its local position or world position.

Animate Translation uses easing curves to perform an animation. These are predefined curves that determine the animations behavior. Ease type is the type of curve to use. These are split into "In | Out | InOut | OutIn". These affect the behavior of the chosen curve.

With the model Node selected and the Animate Translation entity added to the Node, the following will be displayed in the Parameter Panel: