The Update Form UI Task will force an update to the form data.

This is useful when Specification Macros consist of more than one potentially long running task.

Using this task will allow some feedback mechanism to be presented to the user after each task is complete. Typically a form would not update until all tasks have finished.

For example a macro that consists of the tasks:

Using the Update Form UI task it is possible to inform the user once each of the long running tasks are complete.

For example the tasks added to the macro could appear in the following event flow: 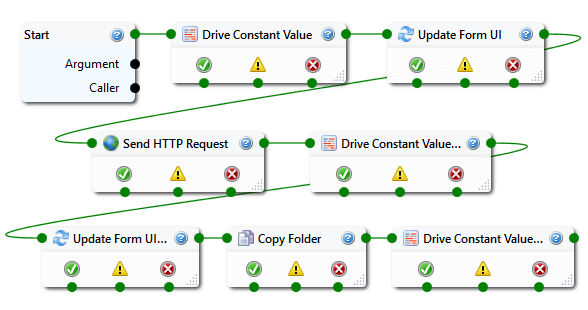 Each Drive Constant task would set the same constant to different values, such as:

A control on the user form would respond to each update of the constant changing to present the user with feedback.

Placing the Update Form UI task after the Drive Constant Value tasks would trigger the recalculation of the form data.

The final Drive Constant Value task does not require a following Update Form UI task, as the form will automatically update once the macro is complete.

Failed (one of the following occurred)