Replacement Models provide an easy way to specify models which can replace the assembly or part against which they are registered. 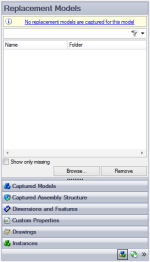 For example, if you have a variety of different feet for a table leg, you could add each one as a replacement model of the foot that is already in the table leg assembly, and then use rules to choose which one of them to use.

This option will display the captured parameters that are missing.

A missing parameter is one that is captured but has since been removed or renamed in SOLIDWORKS.

To remove a replacement model from the part or assembly, select the model in the list, and click the "Remove" button.

How To: Replace An Instance With A Driven Replacement Model

How To: Replace a Component With a Static or Driven Replacement Model