Ambient Occlusion is a camera effect that can be enabled on the Default Camera or any Camera Entity added to a 3D Document.

Ambient Occlusion is a shading and rendering technique used to approximate how exposed each point in a scene is to ambient lighting. It darkens creases, holes, intersections and surfaces that are close to each other. In real life, these areas tend to block or occlude ambient light, therefore they appear darker.

In the above example, we have entered high or strong values to illustrate the effect. In normal circumstances, you would use lower settings to apply a subtle effect.

For every pixel on the screen, DriveWorks will sample the depth values around the current pixel and tries to approximate the amount of occlusion from each point.

The occlusion amount depends on a number of factors, exponent, falloff depth, radius and intensity.

With the Environment selected, the following will be displayed in the Information Panel. 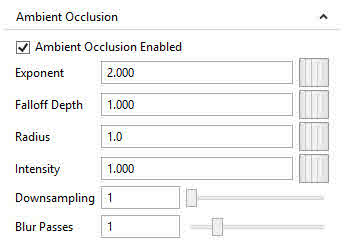 This is the distance between samples on the actual image. A higher value means that the pixel will look further away for surfaces that will darken it. Increasing this value has the effect of smoothing out the Ambient Occlusion effect.

Intensity is a flat multiplier on the Ambient Occlusion effect. Increasing this value makes everything darker equally. This is unlike Exponent which effects the darkening curve.

Ambient Occlusion creates a texture and applies it to the final rendered image. Downsampling controls the size of this texture.

Downsampling is the number of times to divide the texture size that Ambient Occlusion is performed at. For example:

To enable Ambient Occlusion on the Default Camera, follow the steps below:

Preview Mode can be found on the Command Bar in a 3D Document.