Updates the value or equation of an existing Global Variable, or creates it if it does not exist.

The Set Global Variable Generation Task will not be executed if:

The Value/Equation of the Global Variable A is set to ="B"*2.

To build this rule in DriveWorks you need to build a string that results in "B"*2.

To do so, you have to use what is called escaping double quotes.

The rule you would have to build in DriveWorks would then be """B""*2".

This would look like this in the property editor:

And it would look like this in the rule builder: 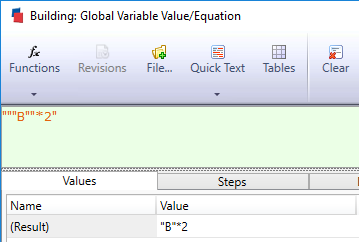