The State Editor is used to control what actions should be taken if an operation or transition is started, or in the event of entering or leaving a state. 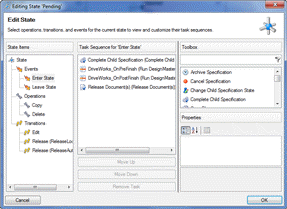 The State Editor is divided into three re-sizable columns:

At any time, you can click "Cancel" to discard your changes.

A State denotes the status of a specification.

Each specification flow must have the following:

To Add a Task to a Task Sequence

To Reorder a Task in a Task Sequence

To Remove a Task from a Task Sequence

To Edit Properties for a Task

When a task is selected, its properties are shown in the property grid.

All tasks have a "Title" property which can be used to give the task a descriptive name. Depending on the type of task, there may be extra properties.

If you build a rule for property, then DriveWorks needs to have the project open to calculate it, which means even if the specification is going from one Paused state to another, DriveWorks will open the project and then close it again which may affect the performance of the project.

For help with a specific condition, see the Toolbox help topic.

To Edit Conditions for a Task

A task can have conditions assigned to it. If any of the conditions fails, then the task won't be run.

To Edit Conditions for an Operation or Transition

Operations and Transitions can have conditions assigned to them. A condition that fails can either hide or disable the associated operation or transition.

To Edit Teams for an Operation or Transition

Operations and Transitions can have team permissions assigned to them so that only certain teams can use them.