How To: Restore a SQL Server Database

This topic demonstrates how to use SQL Server Management Studio to restore a database from a backup.

Please see the HowTo: Backup a SQL Server Database topic for information on backing up a SQL database.

If you are working with a database on a server managed by an IT department, make sure you consult your IT department before following any of these steps. They may already have particular backup policies that you will need to adhere to.

If you are unsure and have an IT department, you should consult them first.

Expand the appropriate section for the version of SQL Server you are using:

There are a few things that can go wrong when restoring a database, the most common are described below.

You must select a restore source

This means that you didn't select any of the check boxes in the list on the main restore dialog.

It is fairly common to see the message below:

To resolve the problem, all you need to do is tell SQL Server to restore to a drive and directory that does exist.

Click the "Options" page on the main restore dialog: 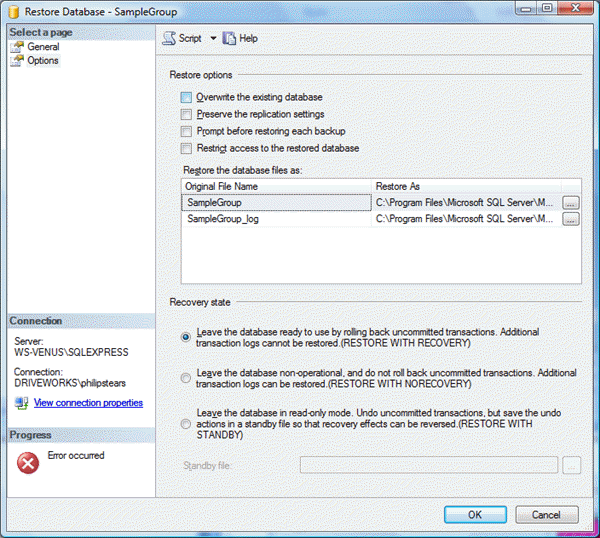 Here you can see "SampleGroup" and "SampleGroup_log", the first of these is the database file that the restore wizard is going to create, the second is something called a transaction log file – don’t worry about what it does, all you need to do, is to make sure that the "Restore As" column contains valid paths – you can either browse for a correct path, or type one in.

Once you’ve picked valid locations, click OK again and the restore should succeed.