The Delay Macro Timeout task will delay the period before the timeout prompt is displayed on any other, potentially long running, tasks.

Looping or nested Macros in DriveWorks have an inbuilt timer that will ask the user whether to continue or stop the execution of the looping Macro after 20 seconds.

This is to ensure that DriveWorks returns control to the user IF the Macro is caught in an infinite loop (Hangs) or a looping Macro in DriveWorks is looping indefinitely (i.e. if the loop Limit Value is never reached).

In some cases it may be expected that looping Macros take longer that this default time (20 seconds) to run, in which case, the timeout period can be temporarily changed using this task. 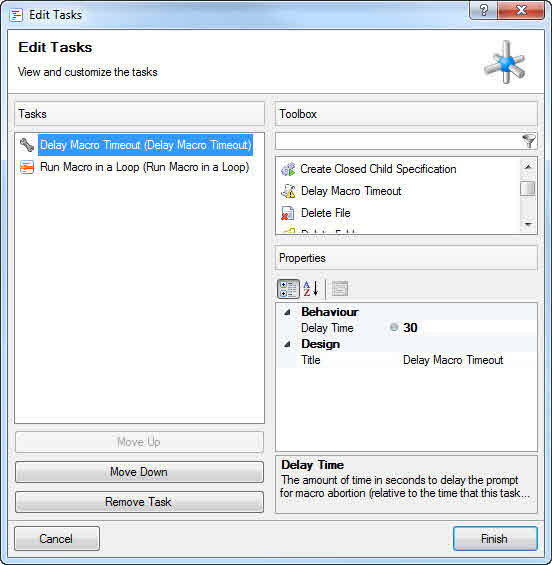 This task will allow a delay period to be defined when running other tasks that have the potential to trigger the default timeout period in DriveWorks.

The Macro timeout will be triggered when DriveWorks executes a Macro. Therefore the Delay Macro Timeout task should be the first task that appears in the list of tasks within a Macro.

When this task is added the properties are static by default.
See How To: Change A Static Property To A Dynamic Property to enable rules to be built on these properties.

Failed (One of the following occured)