Further Specification Reports will be produced when a specification transitions from a paused or Automatic state into another state. These reports will take the name of the transition, for example:

Additionally a Model Report is created after each model has been generated - See How To: Diagnose Project Issues Using DriveWorks Generation Report for more information about these.

The reports give valuable information that assist with diagnosing issues and checking the status of a specification.

When testing or diagnosing a DriveWorks implementation we recommend setting the reporting level to Verbose.

Return this setting to Minimal once testing is complete.

The Reporting level applied at the time each report was produced is displayed in the header of each report.

To open a report: 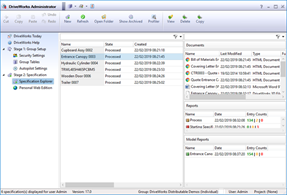 The specification report will open in the DriveWorks Report Viewer 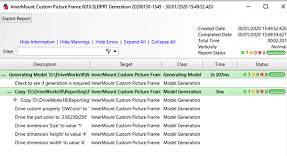 The report details all actions performed on the specification during the transition it was created for.

So, for example, if the transition did not require any documents to be created none will be listed.

Similarly if only one (of many) document is required only the one will be listed.

The report lists each output type in the order of action taken, and is divided into re-sizable columns:

When the Reporting Level is set to Verbose, documents created from a template (Word, Excel or XML) will display each captured parameter and the value calculated to be driven into it.

Releasing Emails is always shown as an action, zero time taken and zero indicators indicate no emails were required.

Model information, if applicable, is shown in the report in a hierarchical structure. Models that are required, and are driven alternatives will appear first (if applicable), followed by the assembly they are driven into. The Assembly structure is shown in the order information was stored in the parameter. Drawings are listed as models alongside the model they are associated to.

The Status column of the specification report gives a good indication that something may require attention.

Status Green - DriveWorks was able to accomplish all actions successfully

Status Orange - Indicates minor warnings that may require your attention.

Status Red - Indicates DriveWorks was unable to carry out the action and investigation is required.

To check the Specification Report for values that were calculated to be driven into documents or models, follow the steps to open the report above and: