This topic applies to DriveWorks v20 SP2 only.

For earlier versions of this template, and the now obsolete List Data Provider with Sub-Lists template please refer to the in product help of the installed version.

The List Data Provider template is a Project Template that allows a custom data provider to be used with the List Manager in the Dashboard and CPQ DriveApps.

The template can show lists within lists, these are referred to as sub-lists.

For example, a customer list can display contacts and all corresponding orders as sub-lists.

Data providers are a way to get data into a DriveApp so that users can add, edit and delete data from custom database tables or other third party systems.

The first step is to create a new Project using the List-DataProvider template by following the steps in the topic Create a new project from a Project Template.

The next step is to consume the data provider by adding it to the List Manager inside the Dashboard or CPQ setup.

Now the data provider is linked to a dashboard, the project can be updated to manage the data.

This template has been created to make it easy to push and pull data from a database.

It can also be modified to pull and push data in other ways, for instance via a web service or API.

This topic will cover using your List Data Provider Project to pull and push data from SQL.

The template adds six forms to the Project:

The AddEdit form is the form that is shown when a new item is added to the list, or an existing item is edited and can be shown as a dialog form, or full screen using the Constant DWConstantFullScreen.

This form already has a background, OK and Cancel buttons, a header, a description and the two fields.

Change the text of the header and description in the control properties to be whatever describes your data, (the form is used to both add and edit your tables data).

The enabled property of the OK button is linked to a Variable DWVariableSaveEnabled.

This rule is used to ensure that the value for Name is unique and not blank.

This rule can be modified to ensure the data in the new Form can be verified.

There is also a Label on this Form (center, bottom) that can be used to inform customers that data has changed.

This will only show when editing existing data and that data has changed, delete this Label if it is not required.

If it is required, change the Variable DWVariableDataHasChanged to compare current with new values.

The AddEditDetail1 and AddEditDetail2 Forms are used for controls that will pull and push data to and from the parent database table.

The AddEditDetail1 Form has two example controls on it.

Rename or delete these controls as required.

Add more Controls to these Forms so users can add and edit data in the parent table.

The Confirmation Form is used to confirm selections, by default these confirmations are:

The information and behavior of this Form is controlled using the Calculation Table - Confirmation Dialog.

If this dialog form is to be used for any other confirmations, add a new row to the Calculation Table.

The Calculation Table sets the header and description as well as which Marcos are run when the OK and Cancel buttons are clicked.

This Form is shown in a Frame Control by running the Macro Set Confirmation which toggles the visibility and also sets the ConfirmationKey Constant, which references the first column in the Calculation Table.

The Filter Form appears at the top of the list.

Add any buttons required to manipulate or process the data.

Add any filtering or sorting controls required for the data.

There is already a search box Form Control that can be used to search the Table, as well as a refresh button that will refresh the data coming from the Table.

When adding new filtering Controls, make sure they are included in the Variable DWVariableSQLSelect for selecting data.

The Filter Form is also the main Form that is shown for the data provider when running in a list.

The first set of variables are for storing the selected item in the list (the SelectedItemID is provided as part of the Dashboard DriveApp).

The important variable is SelectedItemID.

This is populated by the list as is the value returned to the list when a row is selected.

The field used here is the first field in the RawData Variable.

A variable will be required for each field in the database table that will appear on the AddEdit form.

Use a naming convention that can easily match each of these variables to a control on your AddEdit form.

By default the template has two form controls, Name and Value, therefore there are two variables by default, DWVariableName and DWVariableValue.

Use a similar rule to the rule for DWVariableName to get the correct value from the Database table.

For example, change the Name text to be the name of the database table field.

The last Argument in this Rule is the Default Value to use if the LookUp cannot find the data.

Use an appropriate value for the data type and Form Control type, for instance, if the field is a String, use an empty String.

However, if using an integer linked to a Spin Button, the Default Value could be the minimum value of the Spin Button.

The project has a number of variables that should be modified to pull and push the data. 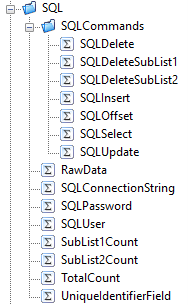 When database changes are executed by DriveWorks, there needs to be a mechanism for re-running the DriveWorks rules for your database table.

To help with this, there is a constant called DWConstantRefreshTrigger which is used in the SQL statements.

This constant can be driven by the List itself, or by the user by clicking on the refresh button on the Filter form.

This button runs a Macro that toggles this constant between being and empty string, and being a string with a single space.

By using this constant in all queries, DriveWorks will force a refresh of the data.

All of the Variables in the DriveAppStandards Category are used to define the UI style and are passed down into your dataprovider by the DriveApp List.

Leave these unchanged if you wish to adopt the style of your DriveApp.

The variables in the category UI can be changed to update your User Interface preferences.

By default, the AddEdit and Delete dialog sizes are controlled from a SimpleTable via these variables.

Any new variables can be added without affecting the DataProvider.

All of the constants have comments explaining their purpose.

None of the existing Constants should be changed with the exception of FullScreen which can be toggled between True and False.

Setting FullScreen to True changes the AddEdit Form to take up all of the available width and height rather than running as a dialog style Form.

Any new constants can be added without affecting the DataProvider.

There are a number of existing Specification Properties that are used to pass data to the hosting DriveApp List. 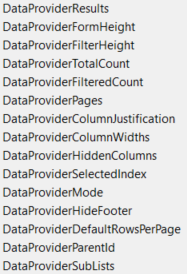 The only ones that should be changed are:

The Template provides all of the Specification Macros that the Data Provider needs although you can add more if required. 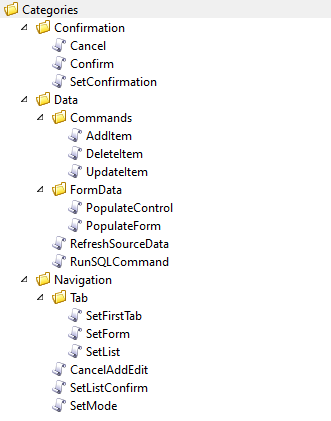 The SetConfirmation macro hides and shows the Confirmation Form in a Frame Control with the correct information based on the Macro Argument.

The Macros in the Data Category are the ones that pull and push the data to and from your Database Table.

These do not need to be changed.

These run the SQL statements from Variables.

This Macro is split into 4 sections, depending on whether Adding, Editing, Deleting or Filtering.

This macro has four sections:

There is one other possible mode that needs no Tasks here, called List.

These Tasks run when you are viewing the list, and you click either the Add button or the Edit button to load the AddEdit Form.

The purpose of these tasks are to clear (or set a default value for) the form controls ready for a new record to be added.

You will need one ‘DriveControl’ task for each form control that needs clearing (Or setting to a default value).

The purpose of these tasks are to populate the form with the values for the selected record.

You will need one ‘DriveControl’ task for each form control that needs setting.

This runs the SetConfirmation Macro with an Argument of ConfirmDelete.

The confirmation Dialog Macros will be responsible for actually running the DeleteItem Macro.

The CancelAddEdit Macro will run when cancel edit is clicked.

If the Parent data is being edited and it has changed, it will show the Confirmation Form.

If not, it will set the Mode to Filter.

The Macro SetForm controls which form is displayed and drives DWConstantTabSelected based on the number extracted from the Macro Caller that triggers this Macro. It also sets the Mode to Edit if a List was previously being shown.

The SetListConfirm Macro will save a new Parent record, store the new ID and then re-run the SetList Macro the Sub List data.

Each row in this table represents a tab which needs to run a Sub List when clicked. By default, there are 3 Sub List tabs in this Template, but this can be modified in the Form Designer and in this Calculation Table as required.

The columns that should be modified are:

The specification is not stored and therefore is not available in the Specification Explorer.