Please consult the Online Help File for the most up to date information and functionality.

The PowerPack works with SYSPRO v7 and v8.

The PowerPack is required to be installed and set up on each machine that has access to the Project(s) that integrate with SYSPRO.

When it comes to passing data back to the system there are two methods:

These methods can be used individually or combined to suit the needs of the integration.

DriveWorks and SolidWorks should be closed while installing the plug-in.

Once installed the plug-in is automatically loaded in DriveWorks.

The plug-in is uninstalled from Windows Programs and Features, and will be listed as DriveWorks SYSPRO PowerPack [version number].

Once installed the DriveWorks SYSPRO PowerPack will be listed in the Plugin Settings.

To enable connection to SYSPRO, settings must be applied. 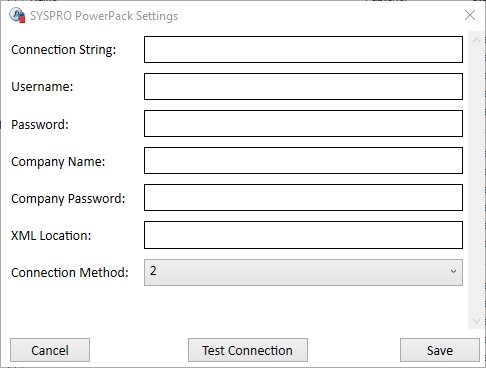 The connection string to the SYSPRO web services.

The username of the user logging in.

The location at which DriveWorks will output XML files to be used by SYSPRO data switch if this is the desired method.

The following functions are added with the PowerPack and are available from the Rule Builder: