The LookAt entity enables Nodes to follow other Nodes. It can also be used to layout models in a scene by pointing a Node at a selected point in 3D. The LookAt entity is designed to make complex implementations easier.

The example above uses the LookAt entity to follow a cube around a scene. The cube is moved using the Smooth Translate entity. The LookAt entity is also being used to maintain focus on the cube. The Node containing the cone model also has a Node with a spot-light entity applied. This results in the cone and the spot-light following the cube around the scene. 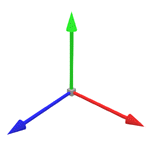 With the Node selected, the LookAt entity will direct a blue arrow or the Z Axis from the current Node to the target Node or position.

With the model Node selected and the LookAt entity added, the following will be displayed in the Information Panel:

Enable and disable the LookAt entity. Disabling the entity will stop the entity where it is and the Node will remain in its current orientation.

Target is the new position or target for the Node to look at. Target can be specified in two ways. You can target another Node in a DriveWorks 3D Document or you can enter the position as a pipe delimited list (X|Y|Z).

When the Target is left blank or has an invalid input, the Nodes rotation will not be affected until a valid input has been provided.

Determines if the node will be rotated on the X axis.

Determines if the node will be rotated on the Y axis.

Rotation on the Z axis can be controlled by making the model node a child of the node that the LookAt entity is attached to.

With the model Node selected and the LookAt entity applied, the following will be displayed in the Parameter Panel:

Please see VectorLookAt. for using LookAt as a function in a rule.
Please see Get LookAt Rotation for more information on running LookAt as a task
© DriveWorks Ltd 2023 - All rights reserved.
Privacy Policy | Terms & Conditions