Depth of Field is a camera effect that can be enabled on the Default Camera or any Camera Entity added to a 3D Document.

Depth of Field is an effect that simulates the lens and focus properties of a camera in real-world camera lenses. In Photography, a camera can only focus on an object at a specific distance. Objects that are further and nearer to the camera become out of focus or blurred. This can result in enhanced realism in a 3D scene and can provide a great visual effect.

With the Environment selected, the following will be displayed in the Information Panel. 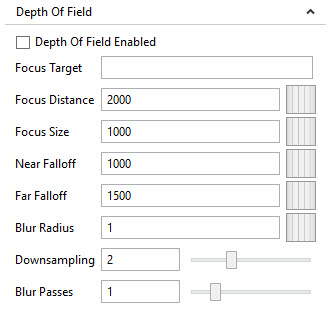 Depth of Field can focus on a point in the scene using several methods. You can either target a Node, target a position in the 3D scene or use a Focus Distance.

The Focus Target property lets you focus either a Node or a position in the scene. You can pass it two values, a Node Address or a Scene Position.

If Focus Target is used, the Focus Distance property will be ignored and not be required.

Depth of Field can focus on a point in the scene using several methods. You can either target a Node, target a position in the 3D scene or use a Focus Distance.

For example: 5000 (This would result in the Focus Distance being 5000mm or 5m away from the Camera)

If Focus Target is used, the Focus Distance property will be ignored and not be required.

Focus Size is the area around the focus target which should be in focus. Focus Size is a numeric value measured in millimeters.

Focus Size creates an area that is in focus. All objects at the focus distance and inside this area will be in focus.

Near Falloff is the distance it takes for the focus region to fade to completely blurred. Near Falloff heads towards the Camera. This is a numeric value measured in millimeters.

Blur Radius is the distance between pixels when sampling. Pixels are sampled to create the blurred effect created by Depth of Field. This is a distance but it is measured in screen space (no specific units).

Depth of Field creates a texture and applies it to final rendered image. Downsampling controls the size of this texture.

Downsampling is the number of times to divide the texture size that Depth of Field is performed at. For example:

To enable Depth of Field on the Default Camera, follow the steps below:

Viewing Depth of Field in a 3D Document

Depth of Field will not be visible in a 3D Document while in edit mode. To preview the Depth of Field Camera Effect, you must enter Preview Mode.

Preview Mode can be found on the Command Bar in a 3D Document.