Dialog Forms, launched from Item Lists, Dialog or Macro Buttons, are not supported inside of a Specification Host Control.

Through the use on Input Values and the controls Return value, you can pass data from a Specification to another specification and back again. 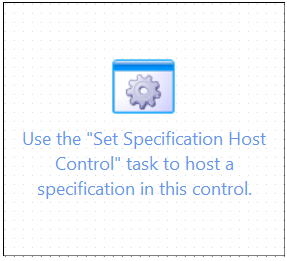 This control does not have a caption. Consider adding a label control if a caption is required.