Smooth Translate is great for moving Nodes continuously. You can constantly change the target and the entity will continue to attempt to get to the target position. Unlike Animate Translation this entity handles interruptions easily and lets you change the position during movement. This makes the entity ideal for moving models around a scene. For example, you can use this entity to position or lay out models in a scene.

The example above uses Smooth Translate to move a sphere around a square shape. As the sphere approaches a target position (corner) a Specification Macro is triggered and a Constant will switch the target position for the sphere so it will move automatically towards the next successive corner.

With the model Node selected and the Smooth Translate entity added to the Node, the following will be displayed in the Information Panel: 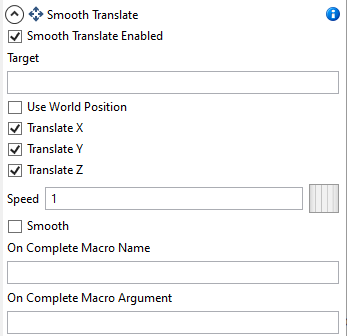 Enable and disable the Smooth Translate entity. Disabling the entity will stop it from running and the Node will remain in its current position.

Target is the new position or target for the Node to translate towards. Target can be specified in two ways. You can target another Node in a DriveWorks 3D Document or you can enter the position as a pipe delimited list (X|Y|Z).

Limits the motion of a 3D node to the X axis

Limits the motion of a 3D node to the Y axis

Limits the motion of a 3D node to the Z axis

Speed determines how quickly a Smooth Translate entity will complete its specified path. Inputting a higher number for Speed will increase the Nodes rapidity.

With the model Node selected and the Smooth Translate entity added to the Node, the following will be displayed in the Parameter Panel:

Smooth Translate can be used for basic animations and movement of Nodes. For example, you can create exploded views in 3D, move or position a model in a 3D scene and open drawers inside furniture. Smooth Translate provides precise linear movement of the Node. This can only be changed by selecting the Smooth property on an entity. This will cause the entity to decelerate in speed as it approaches a target position.

The Smooth Translate and Smooth Rotate entities can be combined to lay out or position models within a 3D scene. The example below demonstrates how a model will behave when both entities are applied. When a wall is selected, the model will move and rotate smoothly towards its specified location.

As well as providing a more visually appealing animation the entities combined will use the Vector functions to calculate the angles of rotation and positioning in a 3D space.