The Data Management Tool has several new features and enhancements that will benefit group and project administration. These include:

All tasks that can be performed on a Group, using Data Management, are now available from a single screen.

Using DriveWorks Tasks you can now run the following tasks from within one area: 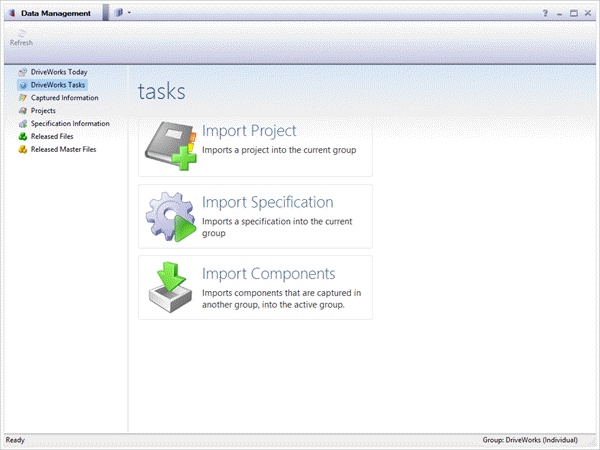 Projects can be imported from other DriveWorks groups (individual or shared) from DriveWorks version 7 onwards.

Import Specification gives you the ability to import specifications from another Group.

This is essential when requiring to maintain specification history from a "In Production" group into a "Development" group prior to going live.

For the Import Specifications button to be enabled the currently opened Group cannot contain any specifications.

Import Components gives you the ability to import components, along with all captured parameters, from another Group.

Components cannot be imported from the currently open group.
Please note the following behavior when importing component sets of the same name.

Filtering throughout the Data Management Tool has been implemented for DriveWorks 10.

Filter boxes are found at the top of the file and file location columns in the main window of the following Data Management Tasks:

Specifications Information has a new column added which displays the Last Modified date and time of each specification made.

Specifications can be filtered based on the date they were created by entering the required date in the filter box.

If you require to filter based on file location, use the filter box above the left column of the main window.

If you require to filter based on file information, use the filter box above the right column of the main window.

The information in the corresponding column will be filtered to match the criteria entered.

Once a filter has been applied it can be cleared by:

A. Removing the characters from the Filter box by using the backspace or delete keys on the keyboard.

B. Clicking the clear button from the filter box (The cross that appears once characters are entered).