Make a 3D scene more realistic through the use of lights. Lights define the color and mood of your 3D scene.

Lights require a little bit of practice but the results can be great looking 3D models.

Lights can add a more dramatic effect to a scene when they have color.

Not all lights are white in color (only direct sunlight). It is important to change the color of the Light to suit the environment the model is in.

Lights, like lamps, have a warm light color. This adds mood to the models and scene.

A 3D Scene may include models that need to look like they are emitting light. For example, lights, lamps and torches.

For example, a Lamp in a 3D Document

This lamp needs to light the surrounding floor. To do this, a Spot Light and a Point Light can be used on the models node. 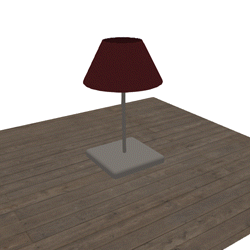 Lights should be attached to the model node so they can move with the model in the 3D scene.

The LightCenter node has been added to the model node. This node can be used to position the Lights relative to the model.

The Lights are then added as extra nodes onto the LightCenter node. Each light has its own node so its orientation can be changed independently from the other. 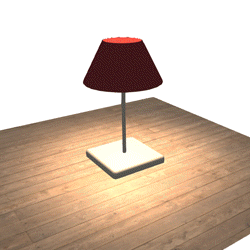 Scenes can be lit using Lights in a DriveWorks 3D Document.

A good example of this would be lighting a model that is outside. 2 Directional Lights can be used to light the scene. One would be a blue color (sky) and the other would be white (sun).

Having these two lights in different directions provides a nicely lit model. The blue light should be less intense than the white light, which should be the brightest.

Node structure helps position and orientate a Light with ease. The structure is below:

These Nodes should be added to the Root node so they rotate about the 3D Documents Origin.

Nodes position relative to their Parent Node. Moving a Parent Node in 3D space will also move its Children.

Each Node is responsible for a different Transform.

This node structure provides easy control over the light source.

By simply rotating the top level Node, it is possible to rotate the Light source around a model or scene. Nodes move relative to their Parent Node. Therefore the children maintain their position from the Parent but Rotate with the Parent Node.

The performance of DriveWorks 3D depends on the device it is running on. Remember that DriveWorks 3D runs on both a desktop and a mobile device.

DriveWorks has a limit on how many lights affect each object. The limit is 5 Directional Lights, 3 Point Lights and 3 Spot Lights per model.

DriveWorks will pick the 3 strongest lights per model and render those. Weaker lights will be ignored and not rendered.

Directional Light - A scene should never really have more than 2 directional lights (sunlight and reflection). Unless you are creating non-realistic light, like 3 point lighting. When using more than two lights, it is important that the lights have different colors. Maximum of 5 per model.

Point Light - DriveWorks will render a maximum of 3 point lights per object. DriveWorks will work out which lights are strongest on that object and render those. More than 3 Point Lights can be added to a scene but 3 are used per model.

Spot Light - DriveWorks will render a maximum of 3 spot lights per object. DriveWorks will work out which lights are strongest on that object and render those. More than 3 Spot Lights can be added to a scene but 3 are used per model.