Please consult the Online Help File for the most up to date information and functionality.

Once downloaded, double click the DriveWorks-SolidWorksCamPowerPack-[version number].msi file to begin the installation process.

DriveWorks and SolidWorks should be closed while installing the plug-in.

Once installed the plug-in is automatically loaded in DriveWorks.

The plug-in is uninstalled from Windows Programs and Features and will be listed as DriveWorks-SolidWorksCamPowerPack [version number].

Once the SOLIDWORKS CAM PowerPack is installed, the following tasks will be available from Generation Tasks. 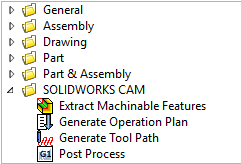 It is common to include these tasks in the Post Drive Tasks area of the Generation Tasks. This will allow the part to be driven by DriveWorks before any CAM data is created.

Each SOLIDWORKS CAM task is a separate task so other generation tasks can be run in between or after any CAM operation.

It is recommended the tasks are run in the following order: