The 3D Text Entity lets you create 3D text on a Node in a DriveWorks 3D Document. 3D Text can be used with different fonts to create configurable text in 3D. 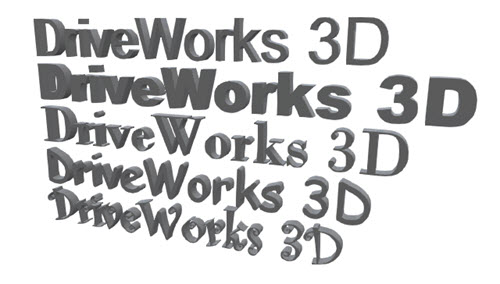 You can also specify the justification of the text as well as the height and depth of the 3D text. An Appearance can then be applied to the 3D text so you can style it how you like.

With a Node selected and the 3D Text Entity added to the Node, the following will be displayed in the Information Panel:

Enter the text that you want to be rendered in 3D by the 3D Text entity.

Controls the justification of the 3D text on the Node. You can choose between Left, Center or Right justified.

Defines a font for the 3D text. The entered text will be drawn in 3D in the defined font. Fonts are listed based on the installed fonts on the computer running DriveWorks.

Depth is how far to extrude the 3D Text. Depth is measured in millimeters. For example, 100 will extrude the text 100mm.

Height is the height of the 3D Text to render. For example, 200 will create text that is 200mm in height.

The height is determined from the bottom of a capital letter to the top. Not including anything that ascends above or below normal letters. For example, `M`, `N`, `A`, etc...

Appearance lets you set an appearance for the 3D Text. You can set a color or texture on the appearance to style the text.

Using the 3D Text Entity is easy. Simply define a font, the text to render and the height and depth of the rendered text. There are a few things to consider, these are listed below.

3D Text is fast and performant. However, there are some things that can effect the performance of the 3D Text entity. These are things like font detail and the amount of characters you render.

Downloaded fonts can contain lots of detail and will create detailed 3D Text. This can sometimes take more time to render.

Likewise, if you are rendering lots of characters, this can sometimes take a long time to render. In most cases this will be fine and shouldn't cause any issues.

Be careful downloading fonts. Downloaded fonts can have missing characters or contain font data that cannot be rendered. Fonts need to have closed loop characters for them to render.

The font used for 3D Text will need to be installed on each machine running DriveWorks or DriveWorks Live. If the font is not available then DriveWorks will fall back to Times New Roman.

The 3D Text entity lets you use many different types of font to create 3D text. Below are some examples of the complex fonts you can use.