This feature is currently in Beta due to the technology that it uses. This functionality makes use of WebXR or WebVR dependant on browser version. These browser features are not yet widely supported. Check WebXR and WebVR support for more information.

The VR Camera entity, when in use, will create two displays of your 3D scene, one for the left eye and one for the right eye. When this is used in a VR device, it creates a virtual reality experience inside your 3D model.

WebXR is overtaking WEBVR as the web standard for virtual reality. Although the browser support for WEBXR is currently lower, it will increase as browsers adapt their technology to facilitate user demand.

The following list of devices, currently work with VR:

Please note, in the case of WebVR, as browsers update and change this feature may be deprecated.

With a node selected and the VR Camera entity added to the node, the following will be displayed in the Information Panel: 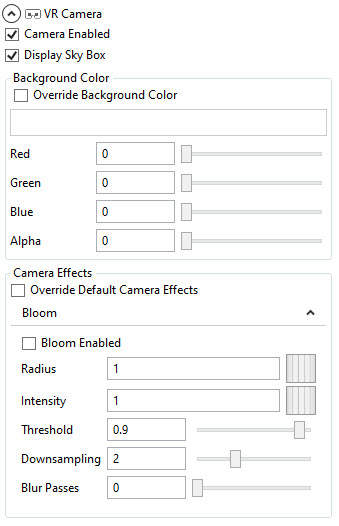 Enable and disable the VR Camera using this property. TRUE enables the Camera, FALSE disables it.

Enable and disable the Sky Box in this VR Camera. The Sky Box is the sky environment that appears around models. TRUE enables the Sky Box and FALSE disables it.

By default, all Camera Entities will use the main Default Cameras effects. This option will override that and allow you to switch individual Camera effects on or off on each Camera Entity.

This is the distance between blur samples on the actual image. This can be considered as the amount of light spread created by the Bloom effect.

Areas of the model brighter than this threshold will receive blooming and blurring. Threshold is the brightness at which to start the Bloom effect.

Bloom creates a texture and applies it to the final rendered image. Downsampling controls the size of this texture.

Downsampling is the number of times to divide the texture size that Bloom is performed at. For example:

As well as this, the XR Orientation entity is used to create two hand controllers, left and right. This entity is combined with a model and the Raycast entity to create controllers that can select models in the scene.

The hand model can be simple cubes or more complex models if you want to add them to your 3D scene. These are just to identify where the users hands are and the direction they are facing.

Lastly, ensure that the Enable VR property on the 3D Preview Control is set to TRUE. This enables the VR button on the control. This button lets you enter VR mode when visiting a DriveWorks Live website in a browser.