Nodes can be thought of as model components, similar to SOLIDWORKS. However Nodes provide you with a lot more flexibility. Nodes can simply be used to build a structure without Models and Geometry.

In addition to this, Nodes can have entities applied to them allowing them to serve another purpose. For example, an empty Node can become a light.

There are two types of Node, within a DriveWorks 3D Document. These are an Assembly Node (Blank Node) and a Model Node (contains Geometry).

Add Node will add an empty Node into the tree. Nodes can be added to any other node to create child nodes.

Every Node has a property called Is Suppressed.

It is also possible to enter a Suppression State name into the properties rule.

For example: There is a Suppression State called Hide Unit, for the Is Suppressed rule enter "Hide Unit" as a string into the properties rule.

Every node has a set of Transform properties. These determine the Position, Scale and Rotation of the Node. 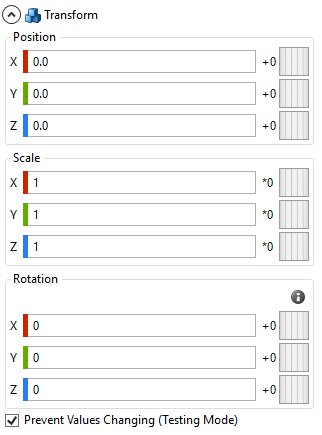 X Position, Y Position and Z Position move the position of the node in 3D space. The value used for position needs to be in millimetres.

Nodes position relative to their Parent Node. Moving a Parent Node in 3D space will also move its Children.

The values shown in the Information Panel are the nodes starting position. Any rules applied to the Position Properties in the Parameter Panel will be added to that start value.

Position Rules are an offset from the starting position.

X Scale, Y Scale and Z Scale apply a scale factor to the node. If the node is a parent node, it has child nodes, everything below that node will scale by the same factor.

Scale allows a node to be scaled by any amount. For example, a cube can be scaled in one direction to make a cuboid of any exact length.

The values shown in the Information Panel are the nodes starting scale. Any rules applied to the Scale Properties in the Parameter Panel will be multiplied with the starting value.

A starting scale of 2 and a rule of 3 will give a scale value of 6.

X Rotation, Y Rotation and Z Rotation change the rotation of the node in 3D space. The value used for position needs to be in millimetres.

The values shown in the Information Panel are the nodes starting rotation. Any rules applied to the Rotation Properties in the Parameter Panel will be added to that start value.

Rotation Rules are an offset from the starting rotation.

This check box prevents the nodes Transform being updated when using the transform wheels to move a model. It is possible to use the wheels to check the direction of movement and reset the models position when let go.

Permanent values can still be entered into the text boxes. These will be applied.

Unchecking this will apply any changes made with the transform wheels.

Model nodes have an additional set of properties under the header Model.

Geometry is a drop down only available in the Information Panel, there are no rules for this property. A different Geometry can be selected and applied to the node. Pick from other Geometries that are available in the DriveWorks 3D Document.

Select an Appearance to apply to the Geometry. Pick from any other Appearance in the DriveWorks 3D Document.

A rule can also be built for this property in the Parameter Panel. Enter the name of a valid Appearance as a string. For example: "Red", "Blue" or "Stainless Steel".